A national think tank is giving high marks to Fairfield for its large number of young firms creating jobs.

The Walton-backed Heartland Forward released a report this month showing the link between entrepreneurship and overall employment growth. In it, Fairfield is ranked No. 35 of 550 micropolitan cities in the U.S. for young firms based on employment share. Heartland’s research ranks U.S. cities based on the strength of their entrepreneurial ecosystem and shows why reviving and supporting start-ups will be critical to a strong economic recovery.

Shelly Wisecarver, Communications and Program Manager at Heartland Forward, said a micropolitan area is one with a population between 10,000 and 50,000, so Fairfield just barely makes the cut with a population of 10,634. Heartland Forward’s report looked at two metrics, one being the share of employment in the micropolitan area at young firms, meaning five years old or less. The other metric was the share of employment with a bachelor’s degree or higher.

“Those metrics, taken together, give us a picture of the strength of an area’s entrepreneurship ecosystem, where entrepreneurs can start and scale their business,” Wisecarver said. “The data shows that young firms are the true job creators. We’ve found that creating a strong entrepreneurial ecosystem is a better strategy for small cities to follow instead of trying to attract big, existing firms.”

Why does Fairfield score so well on these metrics? One factor is that cities with a college or university tend to perform well because they are incubators for a creative environment. Wisecarver said the cities that score well are those where young people feel welcome and want to stay beyond graduation.

“Universities are a powerful magnate to retain talent,” Wisecarver said. “One of the things the report talks about is the importance of universities on innovation, and how they help students commercialize their business ideas.”

Wisecarver said higher education is facing a sea of challenges brought on by the coronavirus such as how it has affected tuition revenues and created uncertainty about whether students can live together in close quarters.

The fact that Fairfield made the Top 40 on this list of micropolitan incubators is all the more impressive when considering that few other cities in the Midwest made the cut. In fact, Heartland Forward looked at the Top 50 metros for job creation by young firms, and found that only five of them are in the middle 20 states. Entrepreneurship is heavily concentrated on the coasts, except for a little slice of southeast Iowa. 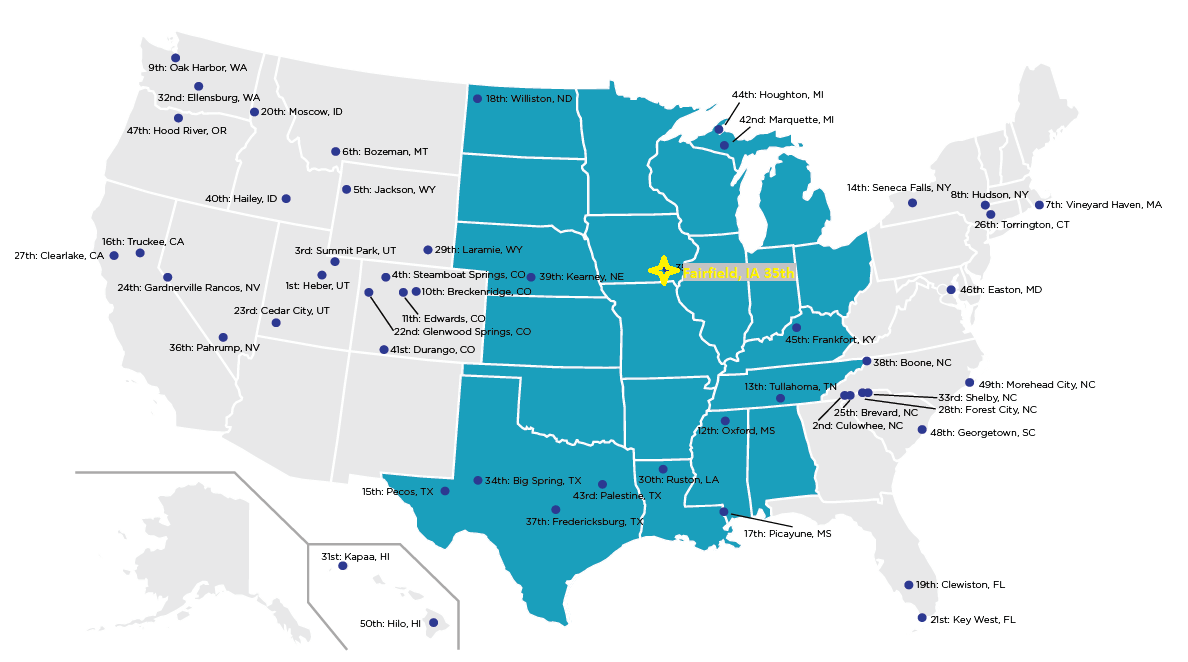